The National Cadet Corps (NCC) as largest uniformed youth organization formed on 16 April in the year 1948 is a Tri-Services Organization, comprising the Army, Navy and Air Wing open to schools, colleges and university students all over India on voluntary basis and engaged in grooming the youth of the country into disciplined and patriotic citizens. It can be traced back to the ‘University Corps’, which was created under the Indian Defence Act 1917, with the objective to make up for a shortage of personnel in the Army. The Cadets are given basic military training in small arms and drill.

The emblem of the NCC consists of 3 colours; red, dark blue and light blue. These colours represent the Indian Army, Indian Navy and Indian Air Force respectively. The 17 lotuses indicate the 17 directories of India.

With its Headquarters located in New Delhi, India the organisational structure continues as follows:

· Directorate – There are 17 Directorates located in the state capitals headed by an officer of the rank of a Maj Gen from the three Services.

· Division / Regimental Corps – There are 3 such Specialised Corps located in Mumbai, Delhi and Bangalore respectively. They are independent of the state directorate and report to the HQ. These divisions form the support function of the regular NCC. Each is headed by a Senior Officer- an equivalent rank of (Lt.) General. Internal Affairs, Administration, Development and Research: Lt. Gen.

· Group – Depending upon the size of the state and growth of NCC in the states, Directorates have up to 14 Group Headquarters under them through which they exercise their command and control of the organisation in the state. Each group is headed by an officer of the rank of Brigadier or equivalent known as Group Commander.

· Company – Each Battalion consists of companies which are commanded by the Associate NCC Officer (ANO) of the rank of lieutenant to major.

The ‘Aims’ of the NCC laid out in 1988 have stood the test of time and continue to meet the requirements expected of it in the current socio–economic scenario of the country. The aims of NCC as approved by the Ministry of Defence are as under:

· To Create a Human Resource of Organized, Trained and Motivated Youth, To Provide Leadership in all Walks of life and be Always Available for the Service of the Nation.

· To Provide a Suitable Environment to Motivate the Youth to Take Up a Career in the Armed Forces.

· To Develop Character, Comradeship, Discipline, Leadership, Secular Outlook, Spirit of Adventure, and Ideals of Selfless Service amongst the Youth of the Country.

1. Obey with a smile

3. Work hard and without fuss

4. Make no excuse and tell no lies

“We the cadets of the national cadet corps, do solemnly pledge that we shall always uphold the unity of India. We resolve to be disciplined and responsible citizens of our nation. We shall undertake positive community service in the spirit of selflessness and concern for our fellow beings” 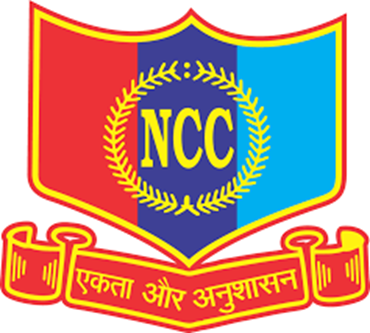 The NCC flag for various units was first introduced in 1951. The flag was of same pattern, colour and size as was used by various regiments of the Army. The only difference was that it had the NCC badge and unit designation placed in the centre. Later on, it was felt that the flag should be in keeping with the inter-service character of the Corps. In 1954 the existing tricolour flag was introduced. The three colours in the flag depict the three services of the Corps, red for the Army, deep blue for the Navy & light blue for the Air Force. The letters NCC & the NCC crest in gold in the middle of the flag encircled by a wreath of lotus, give the flag a colourful look & a distinct identity.

2. To develop national spirit among the students.

3. To make the cadets acquaint with the Army/ Air Force and Navy.

4. To make the cadets better citizens.

5. To inculcate spirit of adventure amongst the cadets.

1. 'C' Certificate is the highest recognition of training and qualification of a Senior NCC cadet

2. 'B' Certificate is the initial recognition of training and qualification of a Senior NCC cadet

Regular activities are being imparted to the cadets as per the syllabus framed by the NCC Directorate for North Eastern Region. Some of them are;

L.T.K. College established on 22nd August, 1977 is one of the higher educational institutions in the Lakhimpur district of the state of Assam. The L.T. K. College NCC Unit was raised on17th June, 2019 under 72 Assam Girls’ (I) Coy NCC Unit. Dr. Binita Saharia was appointed as the first CTO of the L.T.K. College NCC Unit. The total strength of LTK College NCC Unit is 66. But the present strength is 35 with 18 Cadets in 2nd Year, 08 Cadets in 3rd Year. In the year 2020-2021, 9 Cadets from our Unit successfully passed ‘C’ Certificate examination with ‘A’ and ‘B’ grade. Every year 22 cadets are enrolled in this unit. At present, Dr. Himajyoti Doley, Assistant Professor, Department of Political Science is serving as the Care Taking Officer (CTO) since May 2021.